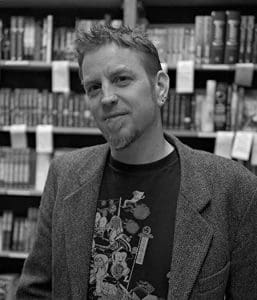 Zack Davisson is an award-winning translator, writer, and folklorist. He is the author of “Yurei: The Japanese Ghost,” “Yokai Stories,” “Narrow Road,” “Amabie: Past and Present,” and “Kaibyo: The Supernatural Cats of Japan” and translator of Shigeru Mizuki's multiple Eisner Award-winning “Showa: a History of Japan,” “Tono Monogatari,” and famous folklore comic “Kitaro.”

Zack has lectured on manga, folklore, and translation at colleges such as Duke University, UCLA, Annapolis Naval Academy, Università Ca' Foscari Venezia, and the University of Washington, and contributed to exhibitions at the Museum of International Folkart, Wereldmuseum Rotterdam, and the Art Gallery of New South Wales. He currently lives in Seattle, WA with his wife Miyuki, dog Mochi, cat Shere Khan, and several ghosts.

You’re a manga fan, but do you know how manga got to where it is today? Make sure to join us at Clark County Library on November 5 to see Zack along with Andréa Gilroy for a fun session highlighting some of the most important manga artists and series – Osamu Tezuka, Shigeru Mizuki, Ryoko Ikeda, and Moto Hagio – that manga fans should be reading today! Look for "Manga 101" on the programming schedule from 1 p.m. - 1:50 p.m. in the main theater.

Read Before You Go

Browse our online catalog for even more titles!