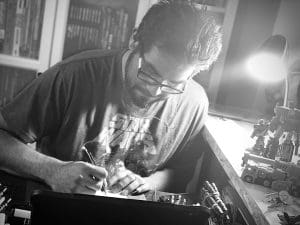 Jeff Pina is a writer, artist, 80s kid, and sci-fi nerd. When he was twelve, Jeff decided he wanted to make comics. At 16 he created what was going to become “Imaginatives” and at 27, he self-published his first comic book, “Dr. Oblivion’s Guide to Teenage Dating.”  Since then, Jeff has created almost a dozen of his own titles, as well as completed work for Valiant Comics, Big Dog Ink, Moonstone Publishing, Hasbro Games.  In addition, he teaches "Penciling and Inking for Comics" at Maricopa Community College.

Be sure to join us at Clark County Library on November 5 where Jeff will show you the whole process of how he creates his stories! From Concept to Print, he'll also share tips and tricks on how to make the process a bit easier, and give advice on how you get started! Look for "Making a Comic" on the programming schedule from 1 p.m. - 1:50 p.m. in the classroom.